Why do I argue more on the internet?!? ::shakes fist at the sky::

So today it was do Rev n Flow by Zoom. We stuck around after for a few minute chat and, naturally, the conversation turned to COVID. Even though I live in Alberta, our town is under Saskatchewan rules so we have in person classes of less than 8 people, I think outside groups of 10 and stores are open at a lowered capacity. Even though we're keeping busy, I think most of us are feeling a little flat. The instructor had mentioned lassitude and I said that or ennui. We're just tired of restrictions regardless of how mild they may be.

One of the ladies went on about how the infection rate was false because people get more than one test. I bit my tongue. Then she said they weren't vaccines because they weren't from deactivated viruses. I said they used a target to focus the immune system. Then she said something about how these weren't really vaccines because they just hide symptoms and I said that's part of how vaccines work...A-N-D it was time to wrap up. The exercise lady is working out at home because she doesn't want to wear a mask - and that's great. At least she's not arguing about the rules.

Even on social media threads I tend to get argumentative. I've worked quite hard to walk away IRL if I have no skin in the game. It's not job to educate them if they are spewing a whole bunch of misinformation; I look at their actions which is way easier in person.

And it's not like I'm perfect so I can argue. A neighbour came over today to ask about Bennie. We've both been vaccinated so I asked him to come inside the storm door so Bennie could get a pat. I kept my distance and left the storm door window open but still...rules are no visiting between households. Other neighbours are having garage sales (we have nothing to sell) and almost everyone is wearing masks and, as far as I've seen, it's been a stream instead of a crowd.

Our numbers are included with the North West rates. It's been pretty flat so it's easy to get complacent since most of the people we know hustled to get vaccinated. But we've seen what happened in India. Variants are a concern. 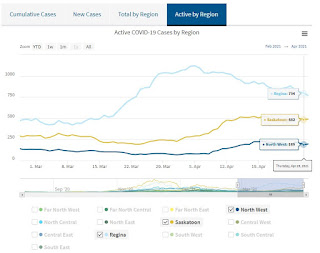 Perhaps ennui lessens our ability to self censor or maybe it's just being away from a range of people. Fred's been expanding his hobbies and I just can't seem to get motivated. Maybe now that Bennie is on the mend that'll change.

A moment to appreciate genius packaging 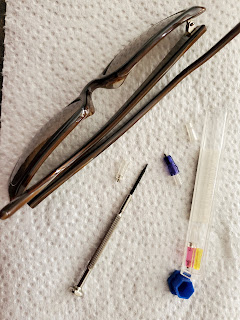 I have glasses for long distance driving and often use prescription sunglasses when driving in summer. Last year one of the arms of my sunglasses lost a screw. In true procrastinator fashion, I waited until we had sunny days again to try to fix it.

Found the fixit kit in the second drawer I checked - yay me! It has a fine screwdriver and some replacement screws. What makes this genius is all the screws are in little Tygon-like sleeves to stop the screws from rattling around and spilling. No need to try to shake a screw out, simply insert the screw driver into the sleeve, pull it out of the container and use it as a guide for screwing the arm in place. When the screw is seated the tube will be on the screw driver. They even used coloured tubing for the lower layer of screws!

I think I got this for a few dollars somewhere. Well worth it.

Email ThisBlogThis!Share to TwitterShare to FacebookShare to Pinterest
Labels: review

Two years of Solar and what have we learned? 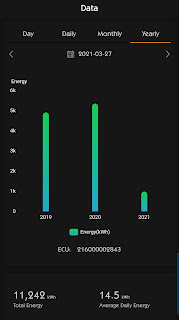 We've had our roof top solar panels for a couple years now. It's been a bit of a bumpy ride as first our monitoring system wasn't set up right then one of our panels failed (very rare). EVEN SO our power generation is quite consistent year over year, which was quite surprising, and there are ways to optimize the value of panels.

Alberta has a LOT of sunshine hours, even during the winter, so our 5.2 kWh annual use is net zeroed with 4.8kWh of panels. The power is contracted to a public company (aka listed on stock market). Our generation agreement is with ATCO Electric and any well run company would be happy to offload the cost of infrastructure installation and purchase energy production. So how do we benefit?

March 14th was my last in person exercise class. I regretted attending a spin class and by Monday all other leisure activities were shut down. So it's been a year since I last attending an indoor class. That and wearing a mask inside public spaces is where my personal line for pandemic activities was drawn and that's well within the scope of local restrictions.

Last night I watched John Oliver, the main topic was Tucker Carson. Then I watched Coroner, a CBC production with a diverse cast that is integral to the show. It occurred to me the plot of Coroner is why Carlson questions the value of diversity.

Footwear - the struggle is real 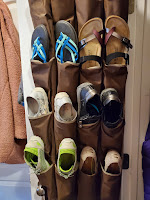 Shoes (and boots) are so tempting to buy. After all, you don't have to get undressed to try them on, there are soooo many styles and occasions for use. Until we both had well paying, steady jobs (~40yo) I wore cheap shoes (Woolco, Zellers then Walmart). I'm easy on shoes and have no foot problems. I'm still easy on shoes and have no foot problems but my purchasing style has changed. I had a lot to learn before I could really afford to make that change.
anecdata ahead...
- December 30, 2020 No comments:

Welp, the foretold surge is well underway with provincial governments stepping in to keep public health access in place by curtailing activities. Alexa has been telling us the weather is dreary and we had already planned to not travel for Christmas - although apparently that wasn't the case for other family members.
Our city has been under SK mandated 4 weeks restrictions that started last week. Private gatherings up to 5 people or 2 households; mandatory masks in public spaces and shorter restaurant hours. SK has been updating their requirements. At first, masking was for towns over 5K but 2 days later included everywhere. Today there will be another update and our fitness instructor is ready to go it from home again.
When I was working and and giving risk assessment training, I always mentioned everyone's risk tolerance was different and for any tasks you have to accommodate the person with the lowest risk tolerance - now I have to walk that walk as Fred is much less tolerant of health risk and seems to be very sensitive to affecting other people's health. He always stayed home from work if he was sick at all and one reason he won't travel now is because he doesn't want to affect anyone, including first responders if we were in an accident. I'm comfortable going out and wearing a mask etc (aka well on my way to complacency).
I am so thankful for where we are in life. Were I still working it would be a huge source of conflict as it's difficult to work from home and that workplace hasn't shut down or slowed down at all. We have a large house with lots of yard (even now covered), great neighbours and a nice park for walking Bennie. Our internet connection is awesome so I can do zoom classes, on line seminars and video chats. Do I miss meeting and gathering? Sure but this will end. Canadians won't get vaccine access as quickly as some places because a Conservative government privatized vaccine production (which promptly fled to a more profitable market) but Canadians will get the vaccination and we'll be first in line.
Be calm, be kind, be safe. Wash your hands and wear a mask.
- November 25, 2020 2 comments:

Cass Morrison
I moved to Alberta from the West Coast so I could live in a place with (cold instead of wet) seasons. After nearly 40 years of work, then school, then work I’ve retired. (We were lucky to remain employed through several oil downturns along the way). We had planned to go somewhere with a longer growing seasons so we can do more outside activities but ended up refocusing on improving our personal sustainability. Projects started include building a greenhouse and adding solar panels. Trying the “relocation for no real reason” exercise really gave me insight to how immigrants and refugees could feel about leaving their home country.